The Triple Crown of Running!

The Triple Crown of Running is officially over. I can't believe all three legs are complete! My friend told me about these races back in November, and I remember saying I wasn't sure I'd be able to complete them since I was scared of injury. I'm happy to say I can eat my words!

The Triple Crown of Running is a collection of 3 road races in Louisville, KY of varying lengths. Each race can be run on their own, but if you run all three you have discounted entry fees and get an extra finisher t-shirt. We all know runners love free t-shirts! All of the runs benefits the Crusade for Children which has received over a million dollars in donation from the race series since 2002.

The Triple Crown of Running began back in 1984, but featured different races then the current 3. Back then it was the Rodes, the Run for the Arts 15k, and the Kentucky Derby Festival miniMarathon. In 2004, the Triple Crown removed the miniMarathon and replaced it with the Anthem 5k.

Even though the race series does not include the mini marathon anymore, many runners (including myself) run the Triple Crown which leads to the mini a few weeks later. I have to say training for these 3 races really helped prepare me for my half marathon. Last year I tried training on my own for a half and failed. I got up to 7 miles and got injured. This year, I've run gotten the chance to run 10 miles at a race pace, and it felt pretty darn good.

Anthem 5k
My friend and I were counting down the days until this race. We both knew we could easily run a 5k and have done them before, so we were excited to have a chance to run a race together and mark the beginning of our half marathon training. I heard that this was one of the largest road races in KY, but I did not really appreciate it until I got to packet picket and saw that there was Bib numbers ranging from 0 to 9000... All road races I've run outside of cross country have been around 100 to 500 individuals. The logistics of almost 10,000 people parking alone seemed impossible.

The day of the race I met up with my friend and her training group at the local YMCA. We got to park for free and walk together to the start line. It was a good idea meeting my friend away from the start line, especially after I realized that the start line was two blocks long. There would have been no way I would have found her! The weather was beyond perfect for the race. If I remember correctly, sunshine and 40 degrees. Perfect for leggings and a zip up, my favorite running gear.

We weaseled our way into the crowd at the start line. I think we lined up near Witherspoon, which was a full block away from the start. It took us just about 10 minutes to actually walk to the start line. We were so pumped and ready to go though that we shot out of the start but quickly realized that we just started a game of frogger. Between slower paced runners, walkers, children, and strollers! the first two miles was a constant zigging in and out battle. I have the race etiquette that if you are going to be super slow or walk the race you shuffle on over to the side so that runners can easily pass. Apparently these people did not hear of this. Some walkers were even holding hands!! A few times I almost plowed into children or people who decided to just stop mid track. My friend and I lost each other within the first 10 minutes of the race unfortunately.And by mile 2 my frustration level was extremely high. I had wasted so much time and energy running side-to-side there was no way I was going to reach my time goal.

According to my Nike + running application I ran the race in 28:34, but my official time is 28:57. Almost a half minute of side-to-side running! My mile break downs were:


This is definitely not my fastest 5k, but it was for sure my most frustrated. The one really cool thing was they filmed the finish line and you can watch as you cross the finish line. Pretty nifty.

Bottom line, would I run again? Probably yes, but I'll regret it afterwards because Ill remember how frustrated I was. 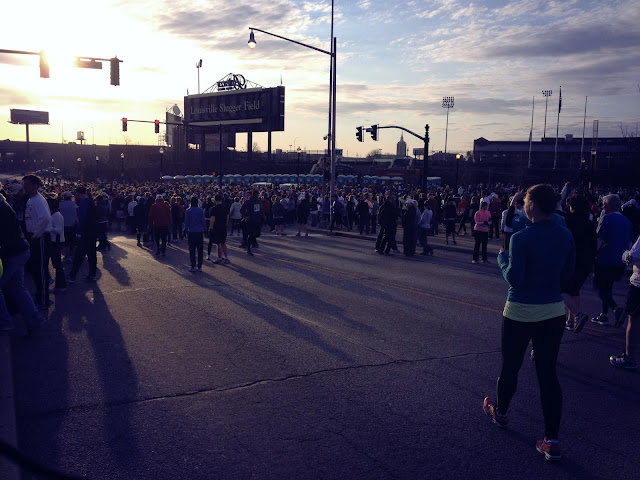 That's me in the bottom right corner in the blue jacket and pink shoes! Walking to the start line, all ready to go!

Rodes City 10k
This next race in the series came days after a very traumatic event occurred in my life. I hadn't run as much as I would have liked that week, but was ready to use this race to get some of my emotions channeled. I didn't get a chance to even look at the course map and luckily my friend's training coach picked up my packet (which had cookie butter in it!!).

The race started downtown in front of the famous Brown Hotel and took us on a large, scenic loop around Cave Hill Cemetery (Colonel Sanders is buried there!) on Grinstead Dr and Lexington Rd and back downtown for a finish line almost in the same spot as the Anthem 5k's. Miles 2-5 were winding fast, rolling hills. It was a pretty run since the trees were beginning to bud and you could feel that spring was just around the corner. The weather was pretty similar to the first race, about 45F with a slight breeze. 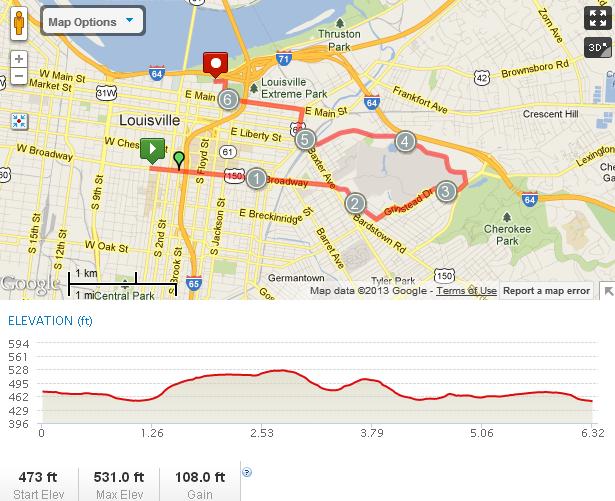 This was another big race, apparently the 12th largest road race in the country! Weirdly enough I didn't feel that I did as much side-to-side running. I felt relaxed and had enough space most of the time to do my thang. After mile 2, I did end up losing my friend, but more so because I knew I needed to slow down a bit.

My mile break downs were:
I think it is pretty impressive of how consistent I was! I only mentally pace myself, I don't ever check my speed while I'm running. My Nike app tells me my pace each mile, but half the time I don't hear what she says since I'm so engrossed in my scenery or my music. Pretty impressive!

My official time ended up being 1:01:27 (Nike + stated 1:01:04). I wanted to finish in under an hour, but under the emotional circumstances I dealt with that week I was very happy with my time. I loved this race and cannot wait to run this course again next year. 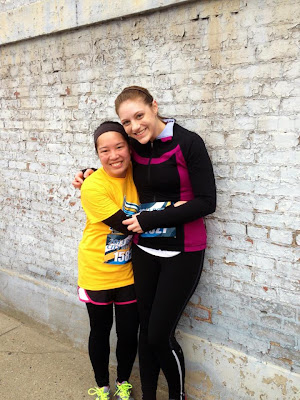 My friend and I after the race!

Papa Johns 10 Miler
I have run plenty of 5k and 10ks in the past, but I have never run a 10 miler. My friend and I trained with many long runs, but at this point in our training we had run at most 8 miles. Running 10 miles at a race pace? I was a little scared.

The Papa Johns 10 Miler is famous for racing through Louisville's Iroquois Park, which contains one of the highest points in the city. Aka MASSIVE hills. I had never been to Iroquois Park so I knew I needed to train there at least once before the day of the race. I am so glad I did, because Iroquois Park turned out to be 3 miles of up and up and up and down and up, etc. I knew what I had to do and knew what kind of energy I needed to preserve for miles 2-6.

This race is the only race in the leg that did not start downtown, so we weren't able to meet the training group at the Y and had to fend for ourselves. This meant traffic and getting to the start line a wee bit late. We ended up walking up to the start line 10 minutes after the race began. It was kind of nice since we didn't feel that initial push from the thousands of runners trying to funnel in. But it did mean we had to do some major zig zagging to get through all the runners who already started. I remember a few times I freaked out because someone would close in on me while I tried to run through a small gap. Once we got into the park I turned found my powersong (Lil Jon's Throw It Up, don't ask), downed a PowerBar GU Pack and put on my game face. I definitely slowed down a bit during the hills, but not a crazy amount. I felt good and loved racing down the hills and finding the momentum to keep powering up the next. Once we hit flat ground at Mile 8, I started to feel a lot of pain in my right knee and had a massive slow down. I still trucked through the end of the race and really enjoyed the last half mile, which lead us into Papa John's Cardinal Stadium where the finish line was at the 50 yard line on the football field. They had an announcer and the jumbo tron on making us feel like we were hot shots! It was pretty darn cool!

My mile break downs were:
This was my favorite of all the races. My official time was 1:43:01 (Nike + clocked me in at 1:41:55). I love racing in Iroquois Park and 10 miles was sort of fun! I felt so accomplished! I was only a 5k away from completing my goal of a half marathon!

Immediately after I finished I kept on walking, got a Gatorade and a banana, but I wasn't feeling anything. Of course there was rows and rows of Papa Johns pizza, but the smell of the food made me feel worse. A friend and I had made plans to grab lunch and go shopping after the race, I ended up bailing out after lunch because I was so sick. I spent the rest of the day, home in bed feeling like I had a hangover (nausea, chills, etc). I felt so sick and dehydrated all day! It took all week for me to get back to normal. I learned my lesson and this race helped me better physically prepare myself for the half marathon. 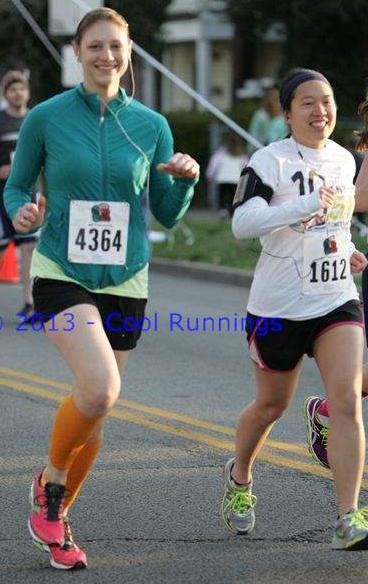 The only race photo of my friend and I! This was taken seconds after the start, as why we were so chipper!

The last 100 yards. Powering through!

Well there you have it! My first experience with The Triple Crown of Running! I truly enjoyed participating in this race series and cannot wait to pick up my Series Finisher T-shirt. I have a feeling this race series will become a yearly event for me. I'm so glad my friend pressured me into doing it with her! We had a blast and it really helped us get in shape for the half marathon. I think part of the reason I was able to reach all my goals running-wise this spring is because I had these races to keep me on track. Next year I can work on crushing times and making some killer personal bests!
Posted by Sarah at 12:22 PM